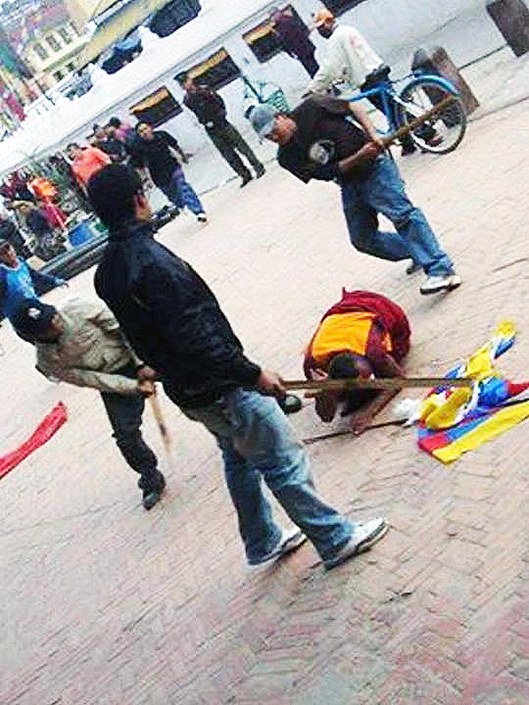 So this is samsara!

Karma is slashing me to bits to be cooked in a cauldron, purified with an Om Ah Hum, set fire with a Ram, and boiled into pure nectar.

I watch all the Buddhas and Bodhisattvas and yidams and deities sip the nectar of my formerly-corrupted-now-purified body.

I am only an Eye. And an Ear. A Nose. A tongue. Skin everywhere that tingles to touch. And not even that.

Just a mist of seeing, plagued so high up by the sight of a bleeding tangled earth, fouled and corrupted by physical and emotional filth.

And I have only a little comb to try to untangle the rat’s nest of hair below me, hair that ravages the eyes of earthbound ones so they itch and burn and see only endless knots of suffering and hatred and greed and fear.

And out of their fear, they grab and grab and hold and lock out their children in the cold.

White privileged families wallow in the guilt of their neglect of their own kin . . . warehouse them in nursing homes, control those traumatized ones lest they reveal the dirty secrets of their traumatization.

or a brother turning his back on an ailing sister,

or a son stepping on his mother’s head after the horror of his father’s suicide,

or the pretense of an alcoholic perpetual fiance (never wife) enabling the father’s suicide, this perpetual fiance never having spoken to him for a week before he broke under the stress of fear for his Marine Corps son’s life in Kuwait.

After all the Hooooraaahs, that expressive Turkish word! . . . Kill! . . that’s what the Turks say . . . Semper Fi to Killing! And be proud of it! (Off with their heads if they’re not)

or a Marine nephew chomping at the bit between slugs of beer to get back and kill all the bad people cause he’s good at it (PTSD is only a state of mind after all).

I’m tired of saying it all.

Not in and of themselves.

But to those who fling them out their mouths in delusion,

and so harm all around them.

All I can do anymore is get out of their way.